The NHTSA reported over 5900 accidents that resulted in pedestrian deaths, which ended up being 16% of all traffic related fatalities for the U.S. in 2017. Over the years the fatal pedestrian accident count has been increasing significantly. Several years ago, the year 1999 only saw about 4900 pedestrian fatalities. The toll began to grow, and by 2016 it spiked with over 6000 recorded pedestrian traffic fatalities. For that year, a pedestrian death had occurred almost every 1.5 hours.

With a population of over 28 million, Texas has been ranked as the 13th highest state with the most pedestrian fatalities according to the Governors Highway Association. It is one of the few larger states that experiences a substantial amount of general traffic related deaths per year. In 2017, the Department of Transportation reported that Texas had the most fatal accidents in America with a traffic related fatality occurring almost every 2.5 hours.

Experts believe the incline in nationwide fatal pedestrian accidents was due to the following changes:

According to a pedestrian accident attorney in Fort Worth, the most typical behavior for pedestrian auto collisions is neglecting to care for pedestrian traffic. This type of negligence includes speeding, failure to stop at a stop sign (“the rolling stop”), miscalculating stopping time at crosswalks, driving intoxicated and most prominently distracted driving.

The majority of traffic experts believe that distractions for both drivers and pedestrians are one of the largest growing contributing factors to all auto related accidents. The Texas Department of Transportation’s research states that driver’s inattention is the 2nd highest factor that resulted in 100,687 distracted driving accidents, with 444 of these accidents resulting in a fatality.

There are many types of driving behaviors and dangerous habits that cause such a large amount of pedestrian accidents. But there are other lesser known factors we looked closely at. These included the time and places that resulted in the most fatal pedestrian crashes in the year 2017.

Most Dangerous Time For Pedestrians 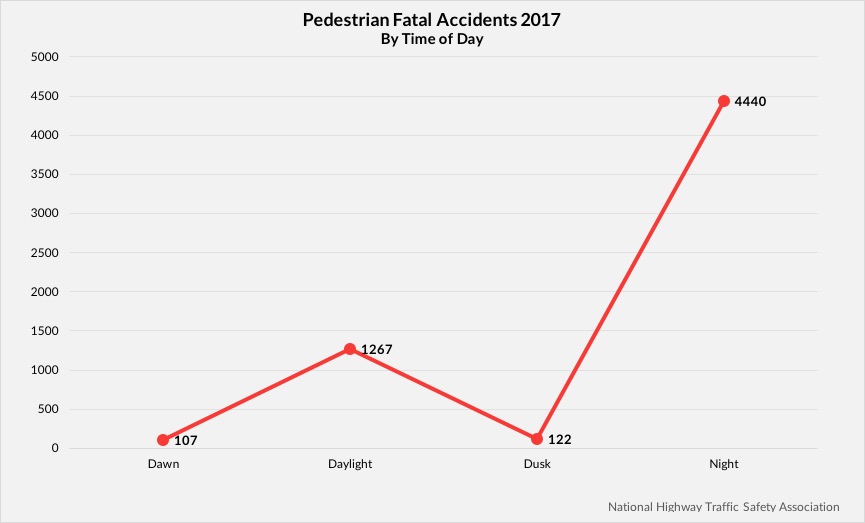 NHSTA’s data reports reveals over 4440 fatal pedestrian accidents during the night when visibility is much more difficult for drivers and pedestrians. Only 1267 crashes had occurred during daylight when visibility was clear and when weather conditions were good. The morning happened to be least dangerous time for pedestrians with only 107 fatal accidents, with early evening having slightly more.

Most Dangerous Day For Pedestrians

We combined all the information from NHSTA’s day and time reports so that we could see the specific time and day where it was most dangerous for pedestrians.From their data we discovered that Saturday night resulted in the most fatal pedestrian accidents (791 accidents). We believe this might be due to the higher chances of drivers driving under the influence of alcohol.

On the other hand, the safest time to be out walking around happens to be Saturday morning, which only had 22 accidents.

What Is The Most Dangerous Place?

When comparing rural and city areas, the heavy traffic urban areas had over 4642 fatal pedestrian crashes, and 1141 in the rural areas which was less than half. Diving deeper into details of location, we discovered that more fatal accidents had occurred in non-intersection areas. To refer back to NHSTA’s statistics, non-intersection areas (roadsides, sidewalks) saw over 4,000 fatal collisions, and regulated pedestrian intersections saw 1,073.

How Can We Prevent These Accidents?

These simple yet effective tips can help reduce the amount of pedestrian traffic fatalities and make the roads safer for drivers and pedestrians. Inevitably, there will still be times where accidents happen. There might be a chance you may be involved.

What To Do If You Are Involved

Pedestrians involved in a serious accident must receive immediate attention from emergency medical responders. After being struck by a vehicle, it’s very important for any nearby witnesses or even the driver to call the authorities and medical help.

If you are a witness, do not try to offer medical assistance. Instead, you can help by making sure the area is safe for other passing cars and people. You may also help keep emotions in check by talking to those involved assuring that everyone remains calm. If necessary, make sure the driver does not leave the scene without any physical contact. The driver has to be present at the scene to talk to the authorities once they have arrived. 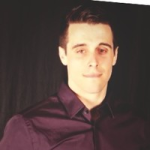