Is Eating While Driving Illegal? 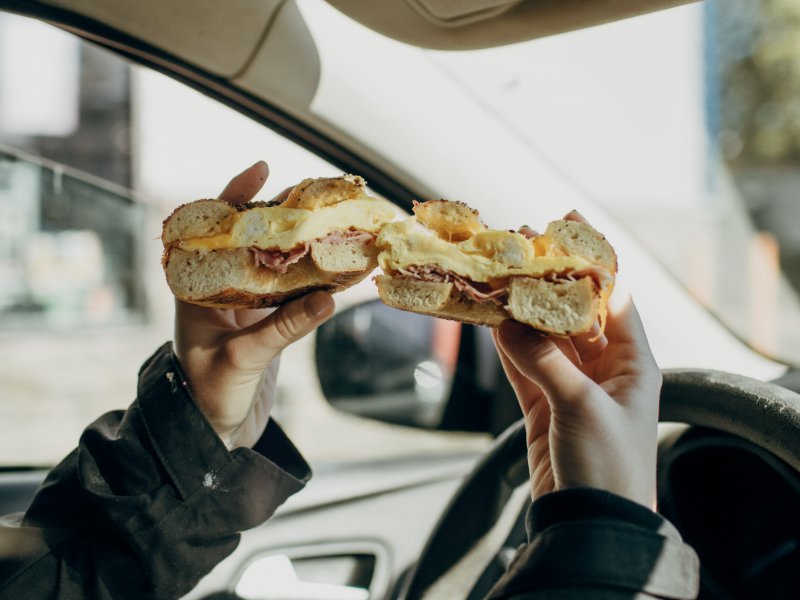 When you think of distracted driving and potential causes for a car accident, you may think of cell phone use. However, there are plenty of other behaviors that you can do while driving that decrease your safety.

According to Safer America, every day an average of 9 people are killed and more than 1,000 are injured due to distracted driving accidents. But how big of a role does eating while driving play?

It may seem counterintuitive that so many drive-through restaurants exist yet it’s dangerous to eat while driving. While no law specifically references eating behind the wheel, there are laws that address distracted driving. For example, the Washington state Traffic Safety Commission defines it as “the act of driving while engaged in other activities that take the driver’s attention away from the road.” Clearly this broad language leaves room for interpretation, and a law enforcement officer must take that decision into their hands.

Examples in the News

In 2010, a FedEx tractor-trailer driver lost control of his truck in Blaine, Washington after he began choking on spicy pork rinds. He veered from the southbound lanes on Interstate 5 and drove across the median into northbound lanes and landed in a ditch. Fortunately, nobody else was hurt and the driver only experienced minor injuries. He was cited for “driving with wheels off the roadway,” which in this case was a result of eating but not a direct charge for it.

The next year in 2011, the California Highway Patrol performed a distracted driving crackdown that included pulling over people for applying makeup, eating, having a dog on their lap, and other types of distraction. The language in each state’s distracted driving laws is broad enough to allow for interpretation, so California law enforcement was in the right.

Speaking of the law being open to interpretation, New Jersey Assemblyman John Wisniewski sponsored a bill in 2013 that would broaden distracted driving laws in his state to include “any activity not related to the safe operation of the vehicle.” This language covers a large variety of distracting behaviors.

In 2015, a man in Atlanta, Georgia was ticketed for eating a quarter-pounder cheeseburger while driving. A local attorney said that he’d never seen such a ticket, at least without there being another driving violation involved. At the time of the article, the driver planned to fight the ticket. He even boasted, “I was extremely careful and didn’t get a bit of mustard on my shirt.”

A woman in the UK in 2016 was arrested for eating a banana in traffic. The arresting officer charged the woman with taking both hands off the wheel while driving, despite her being stopped in traffic. The officer argued that she could be endangering other drivers. The woman first tried appealing the ticket, but when she realized it would be a difficult and expensive process, she ended up pleading guilty. Unfortunately this small offense increased her car insurance payments by 40 percent.

As recently as 2020, a woman in Australia was ticketed $496 for eating an ice cream bar while driving, with the police officer claiming he thought it was a cell phone. In Australia, the law for careless driving is just as vague as in the United States, leaving it open for interpretation. This was another instance of a ticket being issued for the sole reason of eating while driving, with no other driving violations occurring.

Having a broad definition for distracted driving makes it challenging for drivers to know what is and isn’t illegal. The best thing for drivers to do is to assume that any behavior besides operating their vehicle could be dangerous, and should therefore be avoided. While we will probably continue to see different interpretations of the law in different states (and countries), it will be up to individual drivers to decide what feels safe. While most people probably feel comfortable eating while driving, that’s not to say it can’t be dangerous. If you need to eat while driving, try and avoid these dangerous foods.

When it comes down to eating and driving, be cautious and use your best judgement. Just don’t discount the possibility that there may be future legislation that directly forbids it, as the potential distractions behind the wheel grow. If you find yourself part of a legal issue involving a motor vehicle, contact an experienced car accident lawyer for a case evaluation.