What Are the Odds

With over 6 million automobile accidents reported in the U.S. each year, the odds of being involved in a car crash are much higher – and the chances of walking away from the accident are slim.

In the time it will take me to write this article there will likely be over 17,000 reported car accidents across the U.S., resulting in more than 4,000 injuries and close to 100 fatalities. Statistics say that of those 100 fatalities – more than half could have been prevented if the vehicle occupants had worn their seat belt at the time of the accident.

In efforts to lower the fatality count, the “Click It or Ticket” campaign launched in 1993. The campaign began in North Carolina and it allowed police officers to issue citations to drivers caught behind the wheel without wearing their seatbelt. Since the campaign’s debut, a handful of other states have adopted the law and there has since been a steady increase in the number of people surviving car accidents.

Nearly three dozen states now enforce the Click It or Ticket regulation and according to the National Highway Traffic Safety Administration, the national rate for seatbelt use has grown from 70.7% in 2000 to 90.1% in 2016.

The primary enforcement laws vary considerably from state to state. In states such as Alabama, Florida or Iowa – the law only applies to the driver. In a large majority of the 34 states enforcing the regulation, the law applies to occupants in both the front and the back seat.

The penalty amount also varies. For example, Utah only issues a $45 citation after the second offense, but in other states such as California, Texas and Washington, drivers are issued a citation after the first offense – some states as high as $200. To see the cost variation across the U.S., David White, a Texas traffic ticket lawyer, has compiled citation data from each state that has implemented the Click It or Ticket law. Texas, Iowa, California and North Carolina have some of the steepest prices for seatbelt violations. 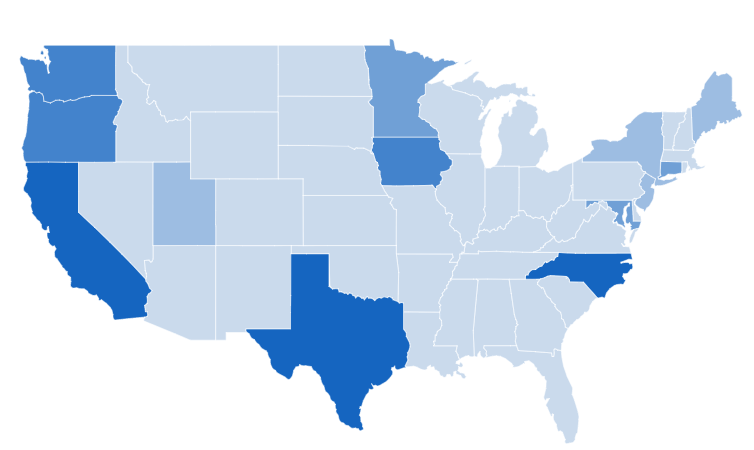 Since the NHTSA first began recording accident data, seatbelts have saved over 300,000 lives – and if everyone had been buckled up since then, another 300,000 could have been saved.

According to the Governors Highway Safety Association, seat belts reduce the chances of fatality by 45% and serious injury by 50%. Angela Osterhuber, director of the Pennsylvania Traffic Injury Prevention Project says, “Seat belts prevent occupants of the vehicle from serious injury in five ways.”

Regardless of whether or not your state implements a seat belt safety law or citation – you should always buckle up. It doesn’t take a set of statistics to know that your seat belt is your greatest chance at surviving a car accident. Drivers get in a hurry on the road, they’re distracted talking on the cell phone, or some people just forget to put on their seat belt before driving away – and as a result, thousands of lives are lost due to these unjustified excuses.

In addition to the Click It or Ticket campaign, the NHTSA works to educate Americans on protecting themselves on the roadways with other campaigns such as Buckle Up America and Never Give Up Until They Buckle Up. It only takes a few seconds to buckle up once you get in the car, why shouldn’t you?