Upon the introduction of smartphones and increased multi-tasking behavior, the National Highway Traffic Safety Administration (NHTSA) is calling distracted driving an epidemic. According to the U.S. Department of Transportation 3,092 people died and 416,000 were injured in crashes involving a distracted driver in 2010.

Distracted driving occurs any time a driver takes their eyes off the road, hands off the wheel or mind off the task of driving. Drivers engage in secondary tasks during more than half of their time spent driving. This type of behavior is easily corrected, and costs the U.S. nearly $40 billion every year.

Common distracted driving behaviors used to include things like eating, grooming and talking to passengers in the vehicle. More recently, these behaviors have become far less dangerous than what we currently have the opportunities to do while behind the wheel. Now, things like texting, checking email, watching a video and replying to a Facebook post have become some of the most dangerous behaviors drivers exhibit on the road. Driver distractions have joined alcohol and speeding as leading factors in fatal and serious injury crashes, with cell phones being the most dangerous.

Researchers say that multi-tasking is actually a myth, and that the human brain can only fully concentrate on one cognitively challenging task at a time. Performing more than one cognitive task at any given time requires the brain to quickly switch back and forth between the two activities, not allowing the brain to fully engage in an important task. Estimates suggest that drivers who use cell phones watch the road, yet they fail to see up to half of their driving environment, according to the National Safety Council.

Thirty-nine states have a current ban on texting while driving. Using cell phones while behind the wheel can be a difficult habit to break, but it is crucial that drivers begin to correct their deadly behavior. 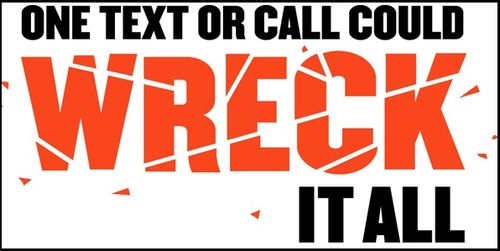